In the National Institute for Health and Care Excellence (NICE) website:

One QALY is equal to 1 year of life in perfect health. QALYs are calculated by estimating the years of life remaining for a patient following a particular treatment or intervention and weighting each year with a quality-of-life score (on a 0 to 1 scale).

In Wikipedia a QALY year is defined: Quality-adjusted Life Year

The quality-adjusted life year or quality-adjusted life-year (QALY) is a generic measure of disease burden, including both the quality and the quantity of life lived. It is used in economic evaluation to assess the value for money of medical interventions. One QALY equates to one year in perfect health. If an individual’s health is below this maximum, QALYs are accrued at a rate of less than 1 per year. To be dead is associated with 0 QALYs. QALYs can be used to inform personal decisions, to evaluate programs, and to set priorities for future programs.

In “Carrying NICE over the threshold” ( 19th Feb 2015 ), Professor Karl Claxton suggests that paying more than £13,000 per QALY for technologies “does more harm than good” by displacing other more effective healthcare from the NHS.

In Scotland it appears that they are taking a lead in commissioning treatment that is very expensive, but effective in prolonging life, for Cystic Fibrosis sufferers. This induces perverse behaviour in families of sufferers, and, in addition, fails to point out what services will be weakened, or not funded, since the resources are limited.  . Cystic fibrosis: Father considers Scotland move to access new drug. BBC News 20th September 2019.  In the end it has to be politicians, with public consent, who agree how to ration. We can afford the CF treatment, but only if we ration high volume low cost treatments, or other more expensive treatments, out. Decisions like that in Scotland, without equivalent saving decisions will make the Health Service (s) worse, and the differences between the haves and the have nots worse. The main expense in the health services is spent on its greatest asset: staff. These are no longer feeling valued, and those that can are making hay as locums. This is an even greater burden to their health services than expensive treatments. Add to this the cost of infections (longer stays and expensive treatments) and litigation, and it is evident that England is correct in putting its population before its CF individuals. How long will they hold out against the media I wonder? Sepsis and Litigation are much larger problems. Emergency loans for Trusts merely defers the inevitable… 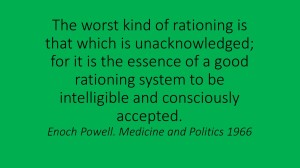 A father has spoken of his agonising dilemma about whether to leave England and move to Scotland so his daughter can access life-prolonging medication.

Dave Louden’s four-year-old daughter Ayda was diagnosed with cystic fibrosis shortly after she was born.

The family live in Carlisle, 10 miles (16km) from the Scottish border, where a new drug has become available.

However, despite the position in Scotland, NHS England said the drugs were not cost-effective.

Costing £100,000 per person per year, Orkambi and Symkevi improves lung health and life expectancy for sufferers of cystic fibrosis.

Patients in Scotland can access the drugs after the Scottish government agreed a “confidential discount” with the pharmaceutical company Vertex.

Cystic fibrosis affects about 10,400 people in the UK and causes fatal lung damage, with only around half of sufferers living to the age of 40.

Mr Louden said it was “heartbreaking” that his daughter could not get the treatment….. 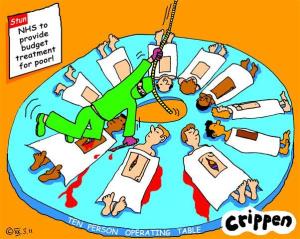 Huw Pym 19th September: How much does diabetes cost the NHS?

1 thought on “Its easy to say you will fund a treatment, but much harder to say what you won’t fund. How long will the English and Welsh hold out against the media led pressures? Emergency loans for Trusts merely delays the inevitable.”