Popular cities like Bristol do not expect to be without GP cover. There have been many more since I last posted on GP closures. The Headline generated by Amanda Cameron in Bristol Live 2nd August reads:

Health chiefs explain decision to close two GP surgeries in Bristol – The decision left 15,000 patients needing to sign up with another surgery within three months

The shortage of GPs is one thing, due to retirement, career changes, part time, and emigration (as well as early retirement due to stress and overwork), but the fact that we have a wave of demented patients coming in the next few years has not become real to the politicians. And it is not just doctors who are under stress. Midwives and nurses too… After all they will be up for re-election before that time, and may not win. The same explanation applies to the inertia om medical recruitment, acknowledgement of dementia, climate change and several other areas….. A first past the post system means we are all subject to short termism. Mending the 4 health services will take decades. So will addressing climate change… The pace of technology advance, especially following CRISPR, is faster than any government can afford. There is only one solution and that is to ration health care, with co-payments according to means. A quality service needs to have equal opportunity for all, and whilst “extras” such as private rooms or choice of specialist are reasonable in a two tier system, different outcomes and life expectancies are not. Will new tests (such as that for dementia) be available to all? In the end it is caring, continuity and trust  that matter rather than technology, especially when we are old.

You may wonder “Perhaps a new health secretary will change things”. No chance. 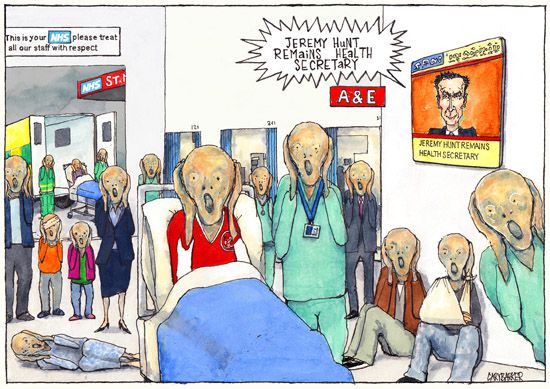 “..Announcing the closure, the CCG said supporting patients to transfer to a neighbouring practice was the “best long-term solution”.

At a meeting of its primary care commissioning committee on July 30, it emerged that the CCG considered three options before deciding to close the Bishopston and Northville surgeries.

Those options included keeping both surgeries open, merging them with other practices, or closing them and sending patients elsewhere.

Following extensive consultation with patients, the CCG concluded that closing them would have “on balance, a neutral impact” on most patients.

Patients might also benefit from “improved provision of care” from practices offering a wider range of services, CCG papers show…..”

Rhys Blakely on June 13th reports in the Times: NHS creaking under the strain of record dementia diagnoses

The head of the NHS dementia strategy has warned that the service is struggling to keep up as cases of the degenerative condition surge.

NHS figures released yesterday showed that nearly 454,000 people aged 65 or over in England have formally had dementia diagnosed: a record. The number of diagnoses has increased by 7 per cent in the past three years…… Alistair Burns, the NHS national clinical director for dementia, said: “The NHS is having to run to keep up as dementia becomes a challenge for more and more families.”

Researchers say they can accurately identify people on track to develop Alzheimer’s disease before symptoms appear, which could help the progress of drug trials.

US scientists were able to use levels of a protein in the blood to help predict its build-up in the brain.

UK experts said the results were promising – and a step towards a reliable blood test for Alzheimer’s to speed up dementia research.