All four UK health services have been asked to plan ahead. Whilst everybody’s attention is elsewhere, the collapsing standards, in both delivery and training, are affecting morale very deeply. Many doctors and nurses are using their qualifications to travel – away from the UK where they feel more valued. In a “world market” this is inevitable.. the only rational response is to train more people in our own country. Meanwhile,, it’s going to get worse. We don’t just need to ration around the March deadline, we need to ration continuously…… Watch for an expansion of private care, including emergency departments, and extension of the demutualisation of the former “N”HS. 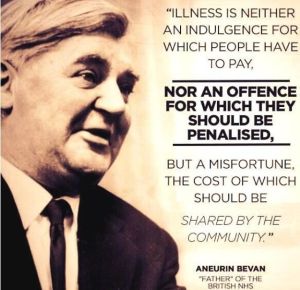 The government has ordered NHS chiefs to “review” the holidays of more than 1m staff as it urges hospitals and GP practices to “ramp up no-deal preparations” for Brexit.

Every NHS organisation has been told to appoint a senior official responsible for contingency planning “as soon as possible”, according to guidance from the Department of Health and Social Care. They have also been instructed to see how many operations are planned for the final weekend of March and “be ready for further operational guidance”. The 34-page document, seen by The Sunday Times, is stark and detailed. It sets out action that NHS service providers should take to prepare for a no deal — in areas including staffing, regulation, finance and the supply of medicines.

In one section, providers are ordered to “review capacity and activity plans, as well as annual leave, on call and command and control arrangements around March 29, 2019”.

The document adds: “There is no ask [sic] to reduce capacity or activity around this time”, but with the caveat “at this point”.

Some NHS officials were dismayed that the guidance had arrived so late. It was issued on Friday afternoon — three months before Brexit Day and just before Christmas, as winter pressures begin to bite.

“We needed this in September, with six months to go, not December 21,” one official said.

NHS groups across the country face complex challenges if there is no Brexit deal.

Hospitals in Kent fear that gridlock on the roads around Dover could stop doctors and nurses getting to work. There is also concern about whether deceased patients can be moved quickly enough to body storage facilities.

NHS officials in London are worried about an exodus of social care workers from the EU after Christmas, which could have a significant impact on the health service. Saffron Cordery, deputy chief executive of NHS Providers, which represents NHS trusts, said: “Obviously, it’s immensely helpful to have guidance from government on how trusts should start to plan for a no-deal Brexit.

“Trusts have been keen to receive this for some time and were expressing concerns as far back as the summer about the need for national guidance.”

The health department said: “We are working closely with NHS trusts, relevant companies and their supply chains so patients can continue to access healthcare services and medical supplies in the same way they do now.”