Under the present funding rules, rationing of health services will need to be more severe, and more covert, in the devolved nations. NHSreality has warned about the problems of smaller mutual in health provision many times….. When readers listen to the debates next week, and think about their personal future, their chances in severe illness, and those of their nearest and dearest, they should think about this prediction… and this despite the figures on the infamous “red bus”…

Kate Whitfield reports in the Express 6th December 2018: Brexit news: How healthcare and the NHS will suffer, deal or no deal – BREXIT will negatively impact the NHS and health services regardless of a deal, a new report has revealed, with devolved nations set to suffer the most.

The report, titled “The NHS and Health Law Post Brexit: Views from Stakeholders and the Devolved Jurisdictions.” released on Tuesday, is made up of research and evidence from interviews around the UK. Concerns about the future of health care include staffing, shortage of medicines, public health, research and funding. Most worryingly, it appears devolved nations – Northern Ireland, Scotland and Wales – might be the worst hit.

Speaking at the launch of the report, researcher Professor Tamara K. Hervey said: “The risks of Brexit vary significantly depending on what kind of Brexit we have.”

However, she added: “No-deal is much worse for health and the NHS than the withdrawal agreement.”

So, whether Parliament votes the prime minister’s embattled deal through next week or not is likely to seriously impact the health sector.

Professor Hervey said: “There are major negatives no matter what kind of Brexit we look at.”

How will the NHS be affected?

The report revealed a number of key findings:

Concerns around staffing are compounded by the already existent shortage of healthcare professionals around the UK.

Northern Ireland is a particular concern, already in the grips of a chronic staff shortage.

But cross-border care between Northern Ireland and the Republic is extra cause for concern: if the UK leaves without a deal and a hard border is re-instated, what will become of interacted healthcare services?

The possibility of shortages and the need for stockpiling has been discussed for some time now.

But here again, there are concerns about the devolved nations.

The findings state: “The key issue is the likelihood of multiple shortages taking place all at once, meaning that the normal responses are inadequate.

“The size of NHS England compared to devolved nations leads to worries about how professionals in Northern Ireland, Scotland and Wales

There are concerns about public health measures, such as combatting smoking, once the UK leaves the EU.

There are worries that, once the UK is no longer under EU regulation, commercial considerations may hold more influence.

The UK will also be leaving the European Centre for Disease Prevention and Control (ECDC) after Brexit, and the report urges the government to pursue a relationship.

The EU is involved in a range of vigilance systems that scrutinise health professionals, pharmaceuticals, medical devices, blood and tissue.

These measures facilitate the protection of patient safety, but may be at risk after Brexit.

Professor Hervey pointed out these dropped scrutiny measures could result in either “mistakes happening inadvertently” or “more powerful interests able to secure advantages” while the UK adjusts to the post-Brexit landscape.

The report finds that the loss of EU funding poses the biggest threat to Northern Ireland and Wales.

“The practical potential adverse impacts of this on health need to be addressed by policy makers in the immediate, intermediate and long-term period of Brexit,” the report said. 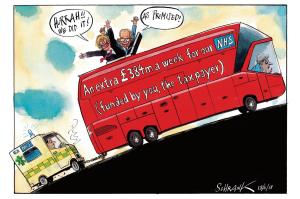