There is no perfect healthcare system, but some are better than others in results, and others are better in sustainability. The UK thinks it’s 4 healthcare systems are good enough, but most people are stoically accepting of shared rooms, cross infections, lack of post-code equality, and long waits for access…. until they themselves are victims. Then it’s too late, and if they can afford it they go privately. 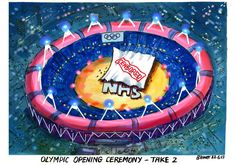 Mark Littlewood (director-general of the Institute of Economic Affairs.) opines in the Times business comment 15th Jan 2017: Winter has come and Britain needs a cure for its ailing health service

In the hit television series Game of Thrones, there is a recurring and unsettling meme. “Winter is coming,” mutter the leading characters in hushed tones. We, the viewers, are left in no doubt that the impact of this seasonal event will be dramatic indeed. Little can be done, apparently, to prepare for it, you just need to brace yourself for its icy grip and its life-threatening impact.

Those who fret about the state of the National Health Service often seem caught in this same cycle of despair. Each year, we can be certain that the weather will worsen and the temperature will drop in the Christmas and New Year period, but we can’t seem to do a great deal to equip ourselves to tackle the associated impact on people’s health.

Although some winters are worse than others, this is now an annual event. We can simply expect, every year, there to be a lack of available beds, missed targets on treatment times and the cancellation of a swathe of operations. Lives are lost and patients remain in pain and misery as a result. The only upside seems to be that the high level of human suffering is at last opening up the beginnings of a measured debate about whether there may be alternative models of healthcare provision that are preferable to the UK system. Other European countries also have winters, but they don’t appear to be accompanied by high-profile political battles about the unbearable stresses and pressures on their health services.

A rational approach to considering whether we have more to learn about healthcare from the rest of Europe than to teach it needs to have some agreed parameters. First, we need to be clear about where we stand on funding. This should, in theory, be relatively straightforward. The UK spends about 10 per cent of GDP on healthcare, both public and private, up from a more miserly 6 per cent at the start of the century. This is a little lower than some other rich EU countries but not by an order of magnitude. In the same way that you might expect a £30 bottle of wine to be of modestly higher quality than a £25 bottle, you might also expect Swiss or German healthcare to be just a little better than its British equivalent. There shouldn’t be a great deal in it, especially if the producers of the £25 bottle purport to be the envy of the entire world.

Enhanced funding might well improve results, but it cannot be the only factor in explaining wildly different health outcomes, given that the UK finds itself broadly in the middle of the pack on expenditure.

Second, we should accept that there is almost unanimous agreement about two underlying principles of healthcare provision, right across the political spectrum. High quality healthcare should be universally accessible and essentially free at the point of delivery. Of course, the NHS itself occasionally diverts from the latter rule, with modest charges for prescriptions and the like, but the key idea is that everyone needs to be able to access treatment and surgery and no one should need to pay prohibitive fees to receive it. Very likely, the staunch public support for the NHS in opinion polls is really a reflection of an underlying commitment to universality and no material charges at the point of need, rather than for the NHS branding or name. Where debate tends to veer off up a blind alley is the unspoken assumption that the UK system is unique in the world in adhering to these two vital principles. The truth is that virtually every developed country has embraced both principles with the same unbending commitment that we have in Britain.

Third, we need to agree that anyone who frames the choice over healthcare systems as essentially being a binary decision between the NHS and the American system should be excluded from the debate. It is an extraordinarily Anglocentric and narrow-minded approach to assume that no country other than the UK and the US should have their own system even considered as a viable option. I have met no one who wants to adopt the American approach to healthcare on this side of the Atlantic; it is fiendishly expensive and appallingly bad at securing access to good treatment for poorer members of society. In some areas it does produce impressive aggregated results (for example, on cancer survival rates) but given that the Americans spend an enormous 16 per cent of national income on health, it is disappointing that their results aren’t considerably better.

If we approach the debate in this way, we may well conclude that the schemes used by most countries on the Continent are preferable to the NHS model. Although systems vary, the basic idea is that each individual has an insurance package that pays out when they need treatment. Those with the means to do so would have to pay for this insurance themselves — in the same way that drivers are obliged to take out motor insurance. Those on tighter budgets would have their premium topped up, or wholly paid for, by the taxpayer. We could insist, through the law, that pre-existing conditions are not considered in the premium charged, so the system is equitable and the risks shared across society. The question as to how much we should spend on healthcare overall is an important argument, but a separate one.

When winter comes in Germany, the Netherlands, Switzerland or Belgium, it is not typically accompanied by their health systems plunging into crisis. They appear to be able to deal with a change in the seasons effortlessly and without spending a great deal more money than we do in Britain.

This year marks the 70th anniversary of the National Health Service, which seems a good time to ask ourselves whether we have a monopoly on wisdom in how to provide healthcare. If we wrongly conclude that we do, we should brace ourselves for many more winters like this one.

Mark Littlewood is director-general of the Institute of Economic Affairs.

As the 4 state systems fail, more taxpayers go private. A two tier approach to rationing by default rather than by design means no fairness for anyone.