The Nuffield Trust and the Kings fund were urging the chancellor “to address the critical state of health and social care” in the autumn budget. They have comment on the Budget and it’s implications for the Health Services in the UK. The impact of severe financial rationing on commissioners will lead to more post code and covert rationing.

“With the budget this week committing around £2 billion extra for the NHS next year, Nigel Edwards said it will bring respite for patients and staff, but is only around half of what’s needed. In a Q&A about the budget live on Facebook, John Appleby appeared with Anita Charlesworth (Health Foundation) and Siva Anandaciva (King’s Fund) to discuss what it all means for the NHS and social care. You can watch here.”

ONE of the first tangible consequences of Britain’s exit from the European Union will be made clear on November 20th, when the EU announces the new home of its drug regulator, the European Medicines Agency, which is currently based in London. The agency will have less than 17 months to pack its bags before Britain leaves the EU in March 2019, whereas by its own reckoning it needs a transition period of at least two to three years. 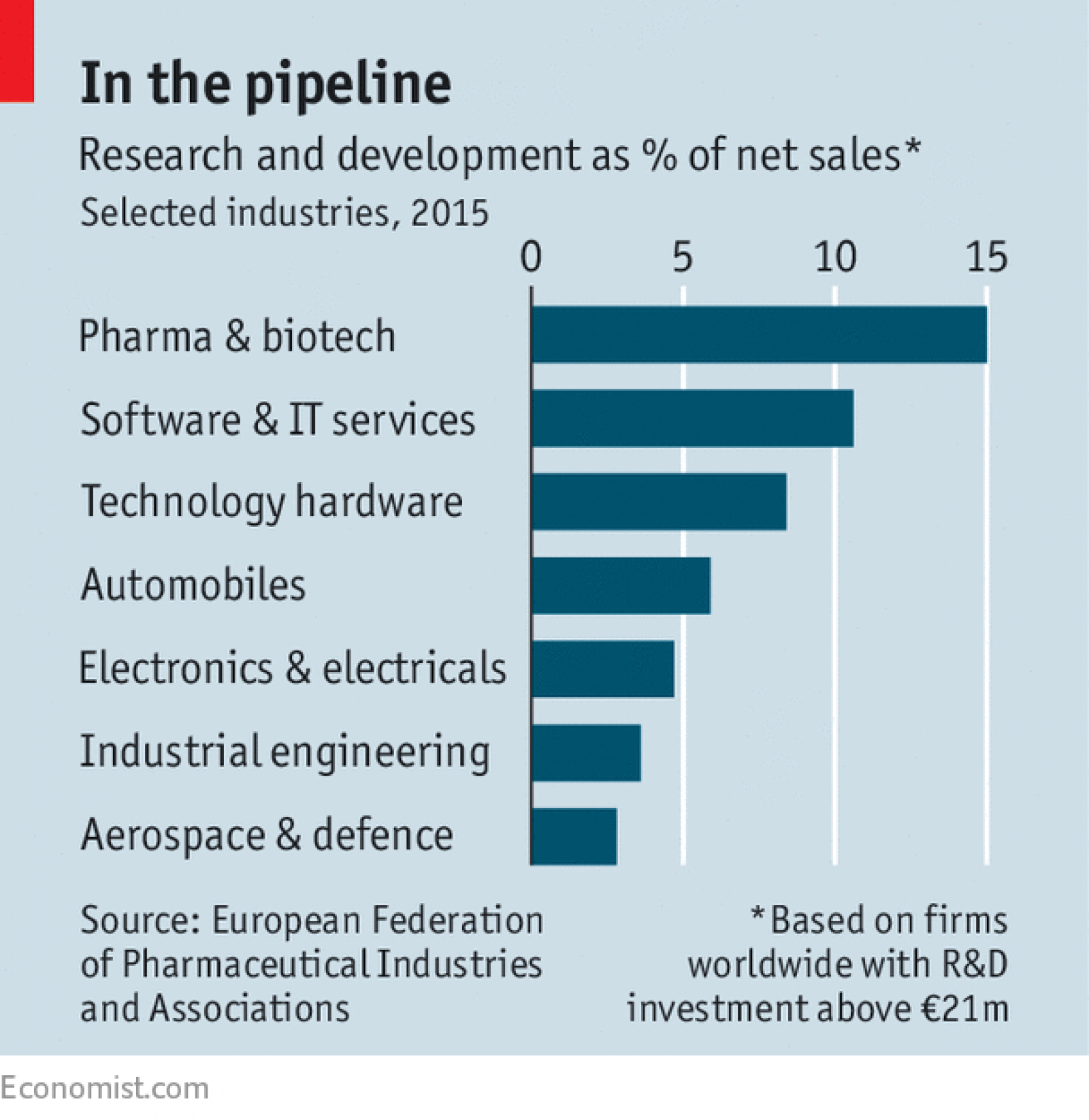 The agency’s relocation is not the only worry facing one of Britain’s most important and most globalised industries. Pharmaceutical firms on both sides of the English Channel warn that time is running out for the EU and Britain to reach an agreement that allows them to continue operating without a hitch after 2019. Companies would need several years to adjust if such a deal were not made. Even agreement on a transition period, to smooth the first years after Brexit, may come too late to be of use to an industry with long production timelines. Firms are thus already preparing for an outcome in which Britain operates outside the EU’s medicines regulations. Some in the industry say they are arriving at an “accidental no-deal”.

Britain has some reasons to be optimistic about the future of its science industry. The pharma business depends more than most on research and development (see chart), which in turn depends on centres of academic excellence such as Cambridge, Oxford and London, which are not going

nywhere for now. Britain still ranks ahead of other European countries for the amount of biotech venture-capital investment that it receives.

Yet its contribution to manufacturing supply chains could dwindle. The Association of the British Pharmaceutical Industry, a trade group, says that if progress on post-Brexit arrangements is not made by December, an increasing number of pharma firms will activate costly “no deal” contingency plans to avert problems in the supply of medicines. AstraZeneca, an Anglo-Swedish company, and Eisai, a Japanese one, have already started to duplicate their testing and approval procedures elsewhere in Europe, in order to ensure access to the EU market after 2019.

Eisai says the work is costing many millions of pounds—money that it notes will offer “no gain” to patients. Pascal Soriot, the boss of AstraZeneca, says his company has an entire team working on Brexit contingency plans. Another large European pharmaceutical business with facilities in Britain says it is “on the cusp” of making a decision to move activities out of the country. GlaxoSmithKline, Britain’s largest pharma firm, will start spending on contingency plans from the end of the year.

Some companies based outside Britain are looking at ways to avoid passing their products through the country, in order to sidestep the costs and delays they might encounter should Britain leave the EU’s single market and customs union. Many drugs sold in continental Europe are primarily made in Ireland and then sent through Britain, where they are packed, tested, given marketing authorisation and released. Tommy Fanning, head of biopharmaceuticals at IDA Ireland, which promotes foreign investment in the country, believes that this British “bridge” to Europe could collapse if no deal is struck.

Continental Europe, too, has cause for concern. On November 9th the European Federation of Pharmaceutical Industries and Associations, a trade group, issued a warning to Brexit negotiators. Just under half the group’s member firms expect delays in the trade of medicines if Britain and the EU fall back to trading according to the rules of the World Trade Organisation. Over 2,600 medicines are at least partly manufactured in Britain, which supplies 45m packs of medicine to other EU countries every month, while 37m come in the other direction. Any Brexit settlement which disrupted these flows would be a bad prescription for patients on both sides of the channel.

Philip Hammond’s cash injection for the NHS is far less generous than it looks and will be cancelled out by the growing and ageing population, says a leading financial think tank.

Health chiefs at NHS England are heading for a confrontation with ministers after declaring that the chancellor’s £2.8 billion boost in Wednesday’s budget was insufficient.

They are holding a board meeting next week to decide whether to step up rationing of services. One Whitehall source expressed surprise that NHS England was mounting what they viewed as an overtly political campaign to challenge the Treasury.

The Institute for Fiscal Studies (IFS) said that the NHS was in the middle of the toughest decade since its creation. “Real spending is essentially unchanged between 2009-10 and 2022-23 after accounting for population growth and ageing,” it added.

Carl Emmerson, the IFS deputy director, said: “The increase in spending does not mean good times for the NHS. The increases are far, far below what it is used to in previous years.”

He said that the £1.6 billion extra allocated for 2019-20 should be seen in the context of the total £125 billion budget. “So if we adjust not just for population but also age, we can see the increases look far less generous and pretty flat even if manifesto commitments are delivered,” he added.

YouGov polling for The Times suggests that increasing money for the NHS was the most popular measure in the budget. Some 62 per cent supported it as a top priority, against 23 per cent for the housing package and 18 per cent for the abolition of stamp duty for first-time buyers on properties of less than £300,000.

Mr Hammond said that the NHS needed to do more to cut waste so more was available for the front line. His aide, the Tory MP Kwasi Kwarteng, complicated the issue by saying that the NHS could receive the extra £350 million per week promised by Leave campaigners during the referendum. “I think actually that we could deliver that. That’s my own view,” he told the BBC.

The IFS also said that the £44 billion housebuilding package could not be relied upon to deliver a big impact.

Mr Hammond told the Commons he wanted the UK to build 300,000 homes a year, although this will largely be done by the private sector rather than a big public housebuilding programme preferred by some cabinet ministers.

The IFS said: “It is impossible to say with confidence how many houses it will deliver.” It questioned the chancellor’s claim that £44 billion was being spent on housing, saying “we haven’t worked out how that’s calculated”.

A former permanent secretary to the Treasury has said that the government’s stamp duty break for first-time buyers was a naked attempt to shore up support and would do little to help young people on to the housing ladder.

Lord Macpherson of Earl’s Court described the measure as a “relieving tax” for the government’s core supporters.

“The vast majority of young people can’t afford to buy any house and probably won’t for many years to come but the proportion of the population who can, no doubt with help from their parents, is the classic sweet spot of Tory middle England,” he said. “People who claim it is bad value for money get it wrong, this is all about shoring up political support.”

The IFS also said that Mr Hammond’s increase in duty on high-strength cider would only affect 9 per cent of the market. “Cider is still the most tax efficient way to get drunk,” said Helen Miller, associate director of the IFS.

There is also an income effect generator in the Times