Surely citizens have a right to comparable information on the most important outcomes IF they are to be treated within a National Health Service. Unfortunately it is not National. Outcomes differ by Post Code and Region. Different Trusts have different death rates: but UK citizens outside of England cannot compare their local Trusts. Our politicians are bringing back fear.. by neglect.

Patients are dying at a higher than expected rate at ten NHS hospital trusts, raising “alarms” about their safety, new figures reveal.

Campaigners have condemned as “very troubling” official mortality data suggesting significant numbers of unnecessary deaths at seven per cent of all English trusts.

Five of these institutions, including two named in a national report into serious hospital failures, have shown an unexpectedly high number of deaths for the second year running in the 12 months up to March 2017.

They include important centres such as the South Tyneside NHS Foundation Trust and Blackpool Teaching Hospitals NHS Foundaiton Trust.

The Summary Hospital-level Mortality Indicator (SHMI) scheme uses a number of factors to predict how many patients would be expected to die at a specific hospital assuming everything is running well.

It allows health chiefs to then compare the actual total against this projection as an early warning for institutional safety issues.

The scheme was set up in response to the Mid Staffordshire scandal, where up to 1,200 more patients died over three years than would have been expected.

While official statisticians stress a high SHMI score does not necessarily indicate poor performance, they say it “should be viewed as a smoke alarm which requires further investigation”.

“The Government and Care Quality Commission have to make sure that everything that can be done is being done to investigate hospital deaths and ensure high quality care.

“If there are any problems action needs to be taken quickly to find out what has gone wrong, to be open with the families concerned and to make sure improvements are made and sustained.”

Both Blackpool and North Lincolnshire hospitals were named in a 2013 review by the medical director of the NHS into 13,000 needless deaths across 14 trusts.

The new figures also found that 17 trusts had a lower than expected number of deaths in 2016-17.

They included some of the major London trusts, such as Barts Health, Chelsea and Westminster, and Imperial College Healthcare, as well as Poole and Cambridge hospitals.

The data is published as as the Government is considering capping the costs payable to lawyers acting for a wide range of victims of NHS negligence.

A spokesman for South Tyneside pointed out SHMI data was “misleading” for that trust because included mortality data for a local hospice, adding: “We have very robust systems in place to regularly review and learn from impatient deaths and people can be absolutely reassured that our mortality indicators for South Tyneside District Hospital are within the expected range.”

And 22nd November 2017: ‘The weekend effect’ means 11,000 extra NHS deaths a year –  Research finds that NHS patients are twice as likely to die after being admitted to hospital at weekends, with significant differences in mortality even when greater number of emergencies are taken into account 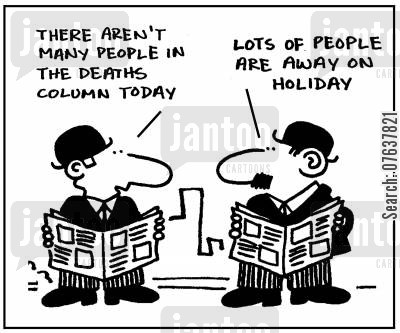