Many A&Es are failing now. As delays, standards, and staffing gets worse, more and more demand will come for private emergency health care – It will start in the cities. The health divide will get worse now… Like Mid Staffordshire and care standards, the problem is endemic. The North Middlesex is only an example of what is going on near you. I hope Julie Lowe does an exit interview for her board – and for the public: somehow I doubt it. The political rules have changed for the next month or so, and Brexit can be blamed on all financial rationing..

The chief executive of crisis-hit North Middlesex hospital has left her post after NHS inspectors found its A&E unit was risking patients’ health by forcing them to endure “excessive” waits to see a doctor.

Julie Lowe has been replaced on an interim basis by a senior executive from another London hospital in the wake of a scathing report by the Care Quality Commission (CQC) into multiple patient safety failings at the North Middlesex.

The NHS care regulator’s inspectors found that shortages of doctors and nurses in A&E were so acute, and the unit so busy, that untrained receptionists there ended up judging which patients needed medical attention first. It is one of the busiest A&Es in the capital, treating 500 patients a day.

“Walk-in patients were seen by a receptionist, who decided if they were suitable for the urgent care centre or, with a more serious condition, needed to go to the main emergency department,” according to the CQC’s report, which rated care in the A&E unit overall as “inadequate”.

“Increasing delays in time to triage [A&E patients by a nurse] can mean that it is up to two hours before a patient is seen by a nurse, where the national standard is 15 minutes, during which time their undetected condition could deteriorate. We were given several recent examples of where this had happened,” the CQC said. 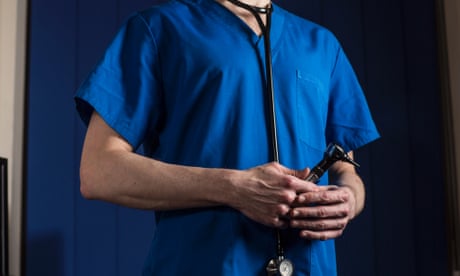 Surviving a night in A&E: a doctor’s story

A senior registrar at an NHS teaching hospital gives an account of a night shift, handling life, death and too many trivial decisions
Read more

The report also revealed that:

The trust maintained that Lowe was “on leave”. But NHS sources confirmed that she has stepped down after national NHS bodies and regulators which are trying to help the hospital lost confidence in her ability to turn its fortunes around. Libby McManus, from the nearby Royal Free hospital, which is now likely to take over the North Middlesex, has become the latter’s interim chief executive.

The Guardian disclosed last month that the General Medical Council and Health Education England were so concerned about the situation in the hospital’s emergency department that they had threatened to close it down by stopping all doctors in training from working there because training and supervision of them by consultants was so poor.

The Labour MP and former health minister David Lammy, whose Tottenham constituents use the hospital regularly, said: “This a truly damning CQC report that has been sat on for months, and frankly it’s even worse than I feared.

“Not only has the emergency department been left in the care of junior doctors, but it now emerges that all patients arriving by ambulance were assessed and treated by nurses without any input from a doctor at all.”

He accused the health secretary, Jeremy Hunt, and national NHS bodies of covering up what he said was the “scandal” of poor care at the hospital in Edmonton, north-east London.

“North Middlesex University hospital is one of the busiest A&E departments in London, so it is worrying that we found that there were not enough experienced doctors on call to deal with demand,” said Professor Sir Mike Richards, the CQC’s chief inspector of hospitals.

The CQC undertook its original unannounced inspection of the A&E and medical units in April and May, and visited the emergency department again last week.

“We have already seen some progress since that original inspection. A new leadership team is in place in the emergency department [and] there are moves to appoint more senior doctors.” The North Middlesex has borrowed five A&E specialists from nearby hospitals to help it improve staffing levels.

“The evidence from our latest inspection is that North Middlesex’s emergency department has turned a corner, but there is still much more that needs to be done,” added Richards. Inspectors will return to assess the whole hospital in September.