Choice and diversity are the issues which West Wales is trying to attract workers with.

Unfortunately choice in the Welsh Health service has long gone. Now it appears that the reality of lack of choice is apparent to the English Health service. Chris Smyth reports 25th Jan 2016 in The Times: Doctors refusing patients the right to choose hospital. Choice is only important to the population when there is overcapacity. We have undercapacity, therefore choice is unimportant within the state health services. This means choice becomes a “private” option, either by direct payment or insurance. This increases the health divide (see previous posts below). We have a choice – ration covertly as now, or overtly as advocated by NHSreality. The Guardian leader refers to the National Sickness Industry, and advocates choice for consumers. It fails however to advocated duty rather than rights, and overt rather than covert rationing. (a recent example of the latter is exclusion of docatexel for prostate cancer – now changed – in England)

Health is closely correlated to Wealth – If you are poor you get no choice (Wales), and live a shorter life, but if you are rich, or born abroad, you live longer and you do get choice! So much for equity…

The Election. Health v Wealth? Or a more balanced approach…

Health is Wealth: How parts of Britain are now poorer than POLAND with families in Wales and Cornwall among Europe’s worst off

Stop the NHS runaway train before it’s too late. The health service is consuming all our wealth ..

Fewer patients are being given a choice over where they are treated by the NHS, prompting warnings that their care is suffering.

Forty per cent of patients were offered a choice of hospital and clinic by their GP, down from 50 per cent in 2010, according to official surveys.

Advocates of choice say that family doctors are neglecting patients’ rights as they revert to “default” local hospitals, and that they are getting away with it because choice has slipped down the agenda while health chiefs deal with a financial crisis.

Howard Freeman, the medical director of the NHS Partners Network, said: “It’s how GPs are programmed to work — we keep coming back to the default position of the local hospital. Choice is something that has to be programmed into them — and it was in the 2000s.”

Giving patients the right to choose where they are treated on the NHS was one of the main health policies of the Labour government. The proportion of patients who remembered being offered a choice of hospital or clinic increased from 30 per cent in 2006 to 49 per cent four years later.

Despite significant reforms that were criticised by doctors for broadening the scope of markets within the NHS, Conservative ministers have made little fuss about the importance of patient choice.

Dr Freeman said that GPs ought to be confronted with data showing how many patients they had referred to places other than the local hospital, so that they could compare themselves with their colleagues.

“We do need to focus on it again,” he said. “The drug industry gets people to go round reminding prescribers about their products. What we need to be doing is reminding people about this product.”

He added: “It is better for patients, that’s one thing I’m absolutely clear about. Many patients [think] that a hospital is a hospital and they’re all the same. As a clinical professional, I know that’s not correct.”

Richard Vautrey, the deputy chairman of the British Medical Association’s general practitioners’ committee, played down the importance of choice, saying: “It’s never been a significant priority for patients. They are more interested in having a good local hospital than travelling.”

He added that while choice was fine for big cities, it did not mean much in rural areas and was deservedly taking a back seat. “It’s become less of a political priority. The focus is very much on the integration of services and bringing local health bodies to work together rather than on competing. I don’t think there’s very much evidence that choice is driving [improvement]. It leads to a more fragmented service.” 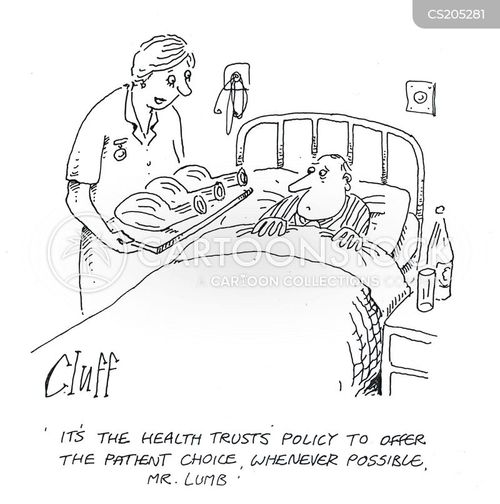