When my father died in March his death certificate said “old age”. He was 91.. On the day before he died he complained “I think my insides have died”, and although he recovered that evening he died the following day. I suspect septiciaemic shock due to bowel ischaemia was the real cause… but does it matter? Accuracy is less important with age, but we do know that even in intensive care units there are errors.

Post Mortems (PMs) are absolute. There is no better way to make a diagnosis determining cause of death, and all medical students are taught to respect the ultimate truth displayed by a properly conducted PM. They are an excellent opportunity to learn, and were well attended when I was a student. There was an excellent standard of teaching (and humiliation with good humour), if one was unable to answer a pertinent question. Quality in PMs is easier to measure than the quality of death or dying. Unfortunately there is a perverse incentive (PI) for hospitals to reduce number of PMs to help their finances…… A study in American ICUs in 2006 (where one would expect the most accurate information) showed that the true cause of 40% of deaths was Multiple Organ Dysfuction Syndrome (MODS), and an earlier study showed 40% inaccuracies…

As they are rationed out, the truth is disappearing in the UK Regions, along with Post Mortems. Once those with the skills are retired it will take generations to replace them.. 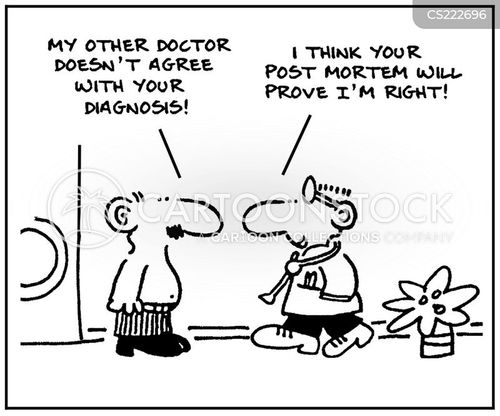 The UK hospital post mortem is on the verge of extinction, having already disappeared completely in around a quarter of NHS trusts, reveals a survey published online in the Journal of Clinical Pathology.

Post mortems are carried out in only just over half of one per cent of all UK hospital deaths, the responses show.

The practice of post mortem examination or autopsy dates back to mummification and human dissection in 3000 BC, but is thought to have entered medical practice in its current form in the 1800s.

The researchers base their findings on Freedom of Information (FOI) requests submitted to 160 NHS acute trusts in England, 14 NHS health boards in Scotland and 7 in Wales, and 5 social care trusts in Northern Ireland.

The requests asked about the number of post mortems carried out in 2013 as a percentage of all adult inpatient deaths in each trust. Out of the 186 NHS trusts contacted, 184 replied, giving a response rate of 99%.

The average post mortem rate was just over half of 1 per cent of all hospital deaths (0.69%), but it varied across the four UK countries.

The average rate was lowest in Northern Ireland (0.46%) and highest in Scotland at 2.13%. The equivalent figures were 0.51% in England and 0.65% in Wales. These figures are lower than recent studies have suggested, say the researchers.

And in only 1.8% of specialist trusts did rates exceed 5%—the figure previously published for non-teaching hospitals.

The findings prompt the researchers to comment that the decline in the hospital post mortem has been relentless and has even accelerated in recent years.

“For better or worse, the practice is on the verge of extinction,” they write. But few healthcare professionals or politicians will be aware of this trend, they say, adding: “Consequently, little has been done to address the falling rates, and the implications of this are not yet fully understood, nor are the consequences.”

“Hospital autopsy now accounts for approximately 1.2% of total autopsies,” they continue. “With such low numbers, questions must be asked regarding the effect such decline has on quality assurance, public health, misdiagnosis (a key contributor to avoidable harms), audit, and the teaching of both medical students and trainee pathologists,” they conclude.

What do people die of? Mortality rates and data for every cause of death in 2011 visualised

Some hospitals double odds of death from a heart attack. Survival is better if you live in a city with a tertiary centre..