As if it was new news Rosemary Bennett reports 23rd September in The Times: Britain throws open its doors to foreign medics  This has always been the case, ever since the service began in 1950. We could have trained enough but we chose to train undergraduates instead of graduates, which resulted in more women than men, and a higher drop out rate.

Britain experienced one of the largest jumps in immigration among the world’s leading economies last year, according to an international report.

A total of 558,000 people came to Britain, a rise of almost a quarter (24 per cent) compared with 2013. Of the 27 other nations analysed in the report, only Israel and the Czech Republic recorded larger annual rises.

Germany and America had more immigrants but lower annual increases.

The data was compiled by the Organisation for Economic Co-operation and Development (OECD), an influential Paris-based think tank that evaluates the economic performances of leading countries.

Its findings illustrate the scale of the challenge faced by ministers to meet a pledge to cut net migration.

Last month, figures published by the Office for National Statistics showed that net long-term migration to Britain, the most reliable indicator, reached a record 330,000 in the year to March.

David Cameron promised to cut net migration to the “tens of thousands” during the 2010 election. A spokesman for the OECD, at the launch of the report, said Europe was facing “an unprecedented refugee crisis” and predicted that applications for asylum could reach a million by the end of the year. The latest figures suggest that refugees have lodged 572,520 applications so far.

José Ángel Gurría, the OECD secretary general, said the numbers were manageable. He called on European leaders to “step up to the challenge”.

“Europe has the experience and the capacity to respond,” he said. “The human cost of this refugee crisis is appalling and countries need to quickly agree a fair allocation of refugees within Europe and ensure that such vast numbers of troubled people receive food, shelter and support. An emerging challenge will be the integration of the many new refugees who will remain in European host countries.

“We need to scale up and adapt programmes so that refugees can integrate as quickly as possible in their new homes and make best use of their skills. We should all remember that migration is not a liability, but an asset.”

Britain has opposed quotas imposed across Europe for migrants from Syria and has instead announced that the country will accept 20,000 asylum seekers from the war-torn country over the next five years.

The 380-page study on migration included an in-depth analysis of foreign-born doctors and nurses in each country. It found that apart from the US, Britain was the most popular destination for foreign-born medics.

“The United Kingdom is the second country of destination for doctors, receiving 14 per cent of all foreign-born doctors who practise in OECD countries, followed by Germany [nine per cent],” it said.

Britain also saw the “greatest swing” in the number of foreign-born doctors working here in the first ten years of the century. The report states that about 2.7 million doctors in the OECD nations last year were trained in foreign countries. They accounted for more than one in four doctors in Britain and America and more than one in three in Ireland, Israel, New Zealand and Norway. A third of all doctors originating from low-income countries were expatriates in an OECD country.

The NHS has always relied on overseas doctors.

Not enough Doctors or Nurses?

Not enough capacity? We are approaching an internal war with not enough beds or people.. 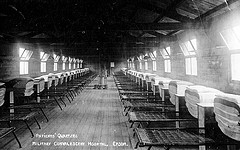 Medical Student Debt. Time for a change in policy on recruitment.

Update 25th September 2015: Below shows the number of overseas doctors 2 years ago and where they came from… The NHS confederation figures put these in perspective and they say: