On Thursday we witnessed an election debate by pithed politicians. Impotence and denial ensure no significant change in philosophy. It is so easy to blame the managers or the CCGs, but when will we, the public, see that it is the politicians and the political system at fault. Side issues such as “health tourists” which cost us so little are a distraction. (Daily Mail –Did Nigel Farage get it right in the General Election debate on HIV health tourists?) The Guardian debate 11th March was no different: Guardian Live: Election 2015 – The Big Health Debate. We need to ration overtly to solve this problem.

An Insurance based system should be better…

The answer is NOBODY – Correspondence following “Is anyone brave enough to sort out the NHS?”

The UK’s party leaders have clashed in the first TV election debate on a range of issues including the NHS, immigration and the deficit.

It is the only time David Cameron and Ed Miliband will appear together on TV ahead of 7 May’s polling day.

The Conservative and Labour leaders, as well as the leaders of the Lib Dems, UKIP, the Green Party, the SNP and Plaid Cymru, also debated zero-hours contracts, spending cuts and education in the ITV-hosted contest.

An average audience of 7.7m, which was a share of 34%, watched the debate on ITV, the BBC News Channel or Sky News….. 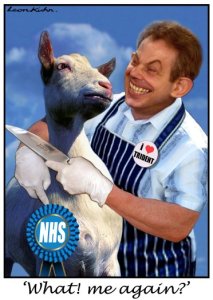 1 thought on “An election debate by pithed, fearful politicians. Impotence and denial ensure no significant change in philosophy.”