There is no reflection in or from our local press and radio, on the rejection of a “New Build” Hospital some 6-7 years ago, after a 3 year debate starting in 2006.. This rejection was led by SWAT and the Media, and the public ignored the advice of their paid and appointed experts.  Admittedly the management and quality of the public meetings at the time was poor. The Western Telegraph on 24th May 2006 reported (before on-line availability): 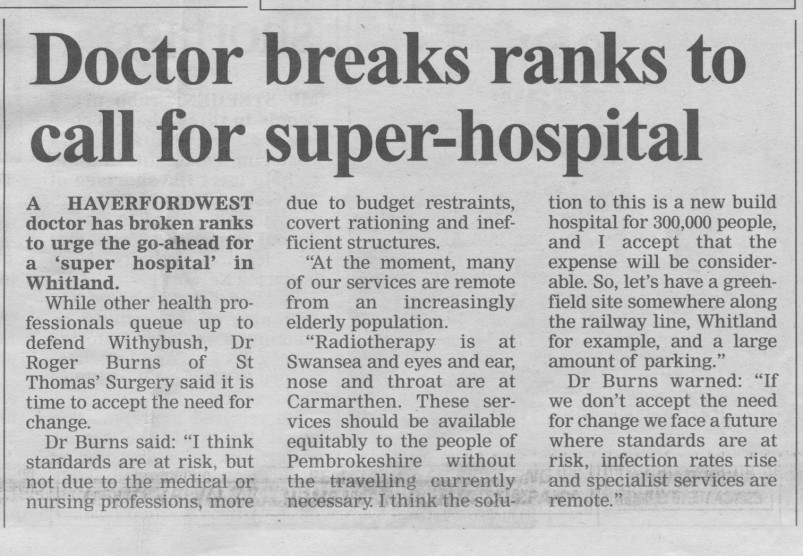 I remember saying at the time that this was the best deal the area would get.. I still think it will happen longer term, once transport links are good enough, and there is over-supply of locally based doctors…

Now Rachael Misstear reports 4th March 2015: Hundreds from West Wales to protest at the Senedd against ‘downgrading’ of Withybush Hospital as organised by SWAT (Save Withybush Action Team).

It is inevitable that, with their seats identical to Pembrokeshire, that the WAM and the MP (both Conservative) will protest and join the action at the Senedd. However, imagine that the number of MPs was cut to 1/6 and the number of WAMs pro rata the same. We would have far fewer overheads! But the important thing is that a representative of West Wales, whose constituency was over the same area as the Hywel Dda Trust would have different priorities. He would have to “satisfice” In his opinion, casting a compromise for the best utility value. Given that there is not a great deal of wealth in the area, we are dependent on handouts from Cardiff (on health, education and social welfare), which are “progressive” in nature – that is reducing inequalities. Rejection of the changes is tantamount to “saying no to government healthcare” as in the US

Regressive change increases inequalities, and wealth, whereas progressive change reduces these differences. Hywel Dda does not have cardiac surgery, or neurosurgery. These were never planned for the “New Build”, and the argument for a larger South and West Wales Trust is a good one, as then these specialist services would be within the same financial unit. By excluding them the opportunity for preferential access leads to covert post-code rationing. Co-incidentally, by removing the aspiration (Sir Bruce Keogh is derisive of mediocrity) in Wales and the “mission statement” of Withybush which was “Aspiring to excellence”, recruitment became harder…

So it strikes NHSreality as perverse that a consultant should stand for Westminster when he would have no influence over the spend or the configuration in Wales. It is opportunistic in that it gives the “protest” vote a chance, but the changes have been coming since 2006, and the Welsh Assembly elections (where the power is) are only 12 months away. Would Mr Overton propose a return to Wales being run efficiently by the Welsh Office I wonder? Does he believe that we can provide “Everything for everyone for ever“, or does he believe we need to ration care overtly? Does he believe in co-payments? What documents will he expect to get access to that the “freedom of information” requests will not? Does he believe Cardiac Surgery should be at Carmarthen or Haverfordwest – it is cardiac problems which cause far the most premature deaths? How would he address the recruitment and retention crisis for medics in rural areas short and long term? Very few medics apply to work in Pembrokeshire…. and those that go to medical school from Pembrokeshire rarely elect to return..

NHSreality has offered an interview. Perhaps now he is a prospective MP an interview will be forthcoming.. It was most wrong to suspend him in 2005, and freedom of speech is a liberty which we all value highly. There needs to be engagement by those making the rationing decisions as to why they are reasonable, and why they were made. In addition all West Wales voters need to hear what is planned to correct the disparity in outcomes between those living in rural areas and those living in cities…

As it happened: Hundreds travel from West Wales to Senedd to protest ‘downgrading’ of Withybush Hospital