Kat Lay in the Times 24th December 2014 has an interesting article which might help our profession reflect on iatrogenesis. The Numbers and the Power are large, so what are the confounding factors? High-risk cardiac patients do better if doctor is away 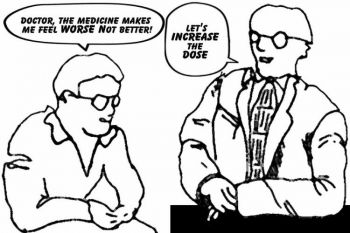 High-risk cardiac arrest patients who are admitted to hospital are less likely to die within a month if doctors are away at medical conferences, a study has suggested.

Research has found that 10 per cent fewer high-risk patients with cardiac arrest died within 30 days if they were admitted to a teaching hospital while scientific meetings were on.

According to the study, 60 per cent of such patients died within 30 days, compared with 70 per cent of those admitted on non-meeting days. Anupam Jena, the senior author, said: “That’s a tremendous reduction in mortality, better than most of the medical interventions that exist to treat these conditions.”

The researchers found that some intensive procedures were performed less often during meeting dates than outside meeting dates and speculated that doctors who did not attend conferences might be more risk-averse.

They also said that doctors might be reluctant to perform intensive procedures on a colleague’s patients while he or she was out of town.

Dr Jena said that the study might illuminate “grey areas” in how patients were treated, and “suggest ways we can provide better care for those high-risk patients”.

The study made clear that the phenomenon applied specifically to high-risk heart failure and cardiac arrest patients, not heart-attack patients or low-risk patients.

The paper, published in the journal JAMA Internal Medicine, compared similar groups of patients treated at hospitals during meetings by the American Heart Association and the American College of Cardiology, and on matched dates immediately surrounding those meetings.

Survival rates at teaching hospitals went up for high-risk heart failure and cardiac arrest patients while those meetings were taking place.

However, there was no difference for high-risk heart attack patients or low-risk patients. There was also no change in mortality rates for patients with any of the conditions in non-teaching hospitals. The researchers said that this could be because teaching hospital doctors might be more likely to attend meetings.

“The evidence suggests that a less-is-more approach might be best for higher-risk patients with these conditions,” said Dr Jena.

Need to know. To improve health care, governments need to use the right data.

Truthfulness and Honesty with patients: Surgeons and Staff should be swabbed for superbugs – same as the patients

CBT questioned if used with drugs, so why not ration by offering choice?

The nation hooked on prescription medicines – no more than many others actually..

Hospital ‘superbug’ not monitored by government